MANIBUS (Movement ANd body In Behavioral and physiological neUroScience) 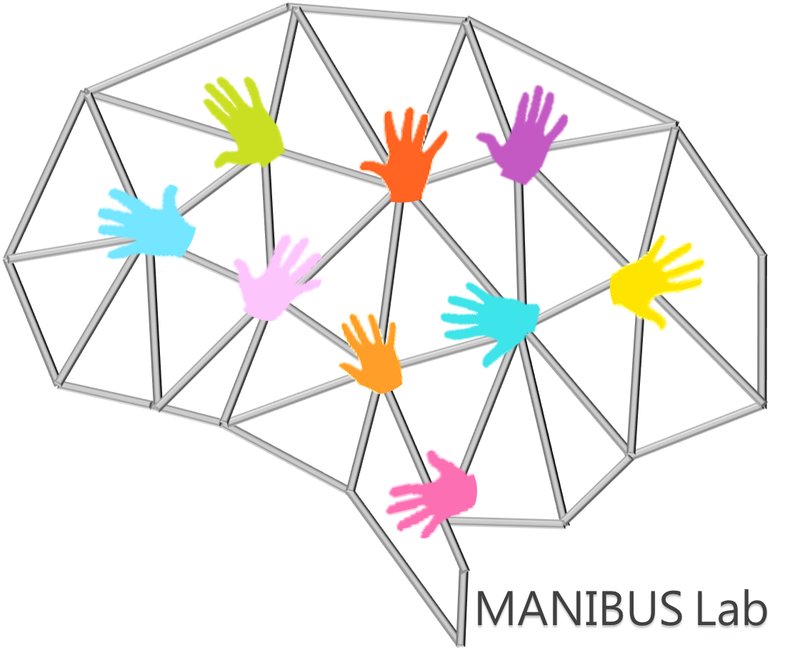 With our hands (manibus, in latin) we act and make gestures, we interface with objects in the outer world and interact with our peers. With the hands, we may caress, but also defend ourselves from a potential danger. With the hands, we may use tools able to extend body limits. MANIBUS group mainly deals with body representation, both in normal and pathological conditions, with a special focus on sensory-motor aspects, defensive behaviors, and adaptive phenomena. Our research is characterized by the adoption of a neuropsychological approach where behavioral alterations, due to brain lesions or reproduced by specific experimental manipulations, are observed through neuroimaging techniques (fMRI and EEG), psychophysiological measurements (SCR, EMG, Heartbeat), or through experimental paradigms involving non-invasive brain stimulation (tDCS and TMS).

The ability to perceive our effectors as parts of a unitary and coherent body schema is often taken for granted. Conversely, this percept is grounded on a complex balance between aprioristic constraints, defining body representations, and the on-line multisensory integration of touch, vision, proprioception, and interoception. How does the brain recognize own-body parts? Which mechanisms are implicated in the distinction between the own body and the others' body? How can we manipulate the body awareness in normal subjects? How can we make inferences on the normal functioning of the human brain starting from pathological alterations of body representation in neuropsychological disorders?

A fundamental component of the self-awareness is the sensation that we are acting with our own body. Through our movements, the body becomes a tool to act in the world and to interact with other individuals.  Thus, a coherent sense of self implies the existence of a tight link between the sense of body ownership and the motor system. Which mechanisms allow us to plan our own actions and to predict their consequences? Can programming, executing, and imaging movements be considered as distinct processes? How can we become aware of our actions? What can we infer from the pathological alterations of motor awareness in neuropsychological disorders?

External stimuli representing potential threats may suddenly approach the body. Therefore, for the sake of survival, a continuous assessment of environmental threat positions according to a body reference frame is essential to define a safety margin within which we have to protect our body. Which defensive mechanisms are we equipped with to defend the body? How does the brain combine the multimodal (sensory, motor, and proprioceptive) information coming from the body to provide an appropriate defensive response? How can we investigate and modulate the boundaries of the defensive peripersonal space? What can we infer from the observation of defensive mechanisms employed in pathological contexts?

Our body is constantly modeled by the interaction with the environment. Within the body, the brain is the organ better representing this adaptive ability. Simple experimental manipulations, such as the rubber hand illusion or prismatic adaptation, by providing incongruent or altered sensory inputs, may induce plastic effects in some specific brain areas. Within the motor system, the immobilization of a limb may modulate cortical excitability. Similarly, a tool repeatedly employed to perform a task may be embodied, thus widening the neural representation of the body, now including the tool and the space that can be reached through its use. Another promising research field is represented by the study of body and brain plasticity phenomena induced by altered gravitational inputs, such as microgravity conditions experienced by astronauts. How can we investigate such plastic effects and exploit these modulations to get further hints on how self-body representation is built and updated in the normal functioning brain?

We are now performing a series of pilot experiments, investigating the neurophysiological correlate of body awareness. By employing electroencephalography (EEG) to record (visual, tactile, and motor) event-related potentials, we aim at observing possible electrophysiological indexes of body awareness in normal conditions or following body ownership experimental manipulations or pathological alterations.

In collaboration with Leonardo Fogassi (University of Parma), we are performing some pilot experiments focusing on the phylogenetic development of body awareness, with the aim of outlining possible comparative studies between human and non-human primates.

We are carrying out some pilot studies aiming at evaluating possible rehabilitative approaches to be employed with brain-damaged patients, showing body awareness deficits. Possible rehabilitative techniques would be based on brain plasticity phenomena and would combine multisensory trainings with protocols of non-invasive brain stimulation promoting functional connectivity among primary as well as associative sensory areas.

National and international co-authors are indicated in our publications list. Here, we highlight only colleagues involved in co-funding and in co-tutoring of PhD students.

Equipment and tools at the disposal of staff research

Fossataro C, Bruno V, Gindri P, Pia L, Berti A, Garbarini F. (2018) Feeling touch on the own hand restores the capacity to visually discriminate it from someone else' hand: Pathological embodiment receding in brain-damaged patients. Cortex; a journal devoted to the study of the nervous system and behavior 104 207-219 [DOI  PMID]

Bisio A, Garbarini F, Biggio M, Fossataro C, Ruggeri P, Bove M. (2017) Dynamic Shaping of the Defensive Peripersonal Space through Predictive Motor Mechanisms: When the "Near" Becomes "Far". The Journal of neuroscience : the official journal of the Society for Neuroscience 37(9) 2415-2424 [DOI  PMID]

Piedimonte A, Garbarini F, Pia L, Mezzanato T, Berti A. (2016) From intention to perception: The case of anosognosia for hemiplegia. Neuropsychologia 87 43-53 [DOI  PMID]

Garbarini F, Piedimonte A, Dotta M, Pia L, Berti A. (2013) Dissociations and similarities in motor intention and motor awareness: the case of anosognosia for hemiplegia and motor neglect. Journal of neurology, neurosurgery, and psychiatry 84(4) 416-9 [DOI  PMID]